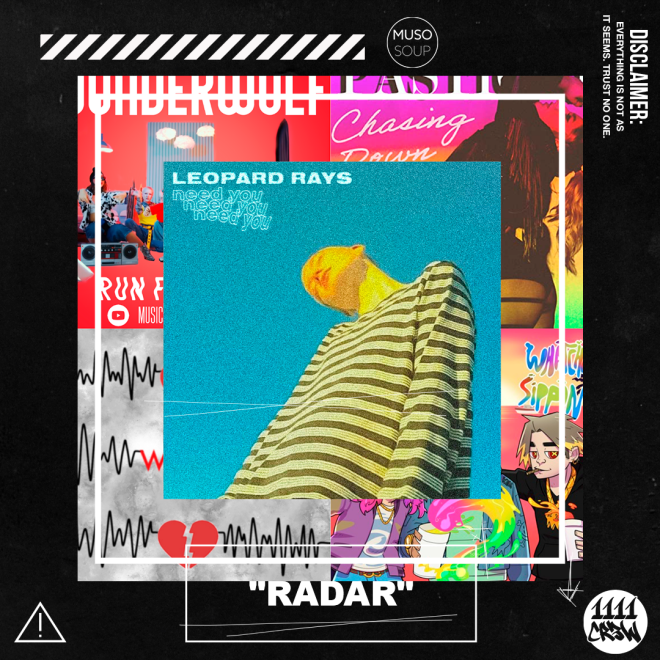 Hello mates!
How are you doing?
We are doing well, and once things are coming together, now is time for our Radar session, edition #2.

2021 is coming up with loads of surprises and if you’re wondering, this list is powered by Musosoup, bringing to you those artists who are doing great songs but are still underrated. In the case that you want to be part of this list, here is a link so you can make it happen.

Let’s see who was caught by the Radar now.

Leopard Rays is an alternative rock band from Hartlepool UK, now dropping some fresh tunes called Need You. Besides being a bop, the song is the perfect soundtrack of the moment. Leopard Rays are formed by Luke Dawkins on vocals, Sean McCloskey on the guitar, Tom Pattison on bass, and David Wilcox on the drums. This new cut is the follow-up after the success of their debut EP titled “Times A Factor, Kid.”

The band is inspired by the likes of Pearl Jam, Oasis, and blends dreamy guitars in an alternative rock sound with a traditional American approach from Chicago, brought by McCloskey originally hailing from the US, locking the podium this time.

The band seems to be doing great in the music industry, from performing sold-out gigs and music festivals post covid resulting in a decent buzz with tastemakers, including the likes of BBC Music Introducing.

Let’s hope the band can get back on the road very soon!

WonderWolf is a melodic rock act based in Germany, releasing their music video by HopePunk Records.

Originally from South Africa, Gideon Kretschmer is a songwriter, musician, and producer pretty much experienced picking the music path since he was 13 years old. With three albums released so far, his sounds come from laid-back melodic pop ballads to grungy groove and pop-rock, all the way through to heavier hard rock and emo sounds.

“Run for Cover” is truly a catchy song, and we could consider it the 2021’s anthem, once we are very close to release our first printed edition of RADAR.

Inspired by the lockdown, the music video is about a group of party-starting rebels rocking out in their lockdown madness bubbles.

This sounds fair enough to us and secures 2nd place on our Radar list.

3- Pastiche – Chasing Down the Fame

Debuting her first single called Chasing Down the Fame, Pastiche is a Dublin-based singer and songwriter. The cut combines dark and electronic pop, a rebellious club-kid sound. Chasing Down the Fame is absolutely a catchy bop that will get stuck in your head in no time at all!

Pastiche clearly is set to make a massive impact in the Irish pop scene and is in the process of recording new and upcoming tracks, you can check below why she is getting the 3rd spot.

Hailing from the UK, Anna Mae Kelly is a musician and songwriter who has dropped ‘Weaver‘

She is inspired by both the musical and personal journeys of previously troubled stars such as Elton John and Freddie Mercury. You can mix all that with Adele, Florence & The Machine, Imagine Dragons, Queen, and Taylor Swift, and there you have Anna coming up with a modern approach.

Wanting to help others through her talents, writing songs about life challenges, describing herself as an outcast.

Overcoming the difficulties in her life and practicing the piano since a very young age, Anna is proud of what she has become and wants to be a friend to her audience.

The song Waver already was spotted in our Spotify playlist, and it’s about an abusive relationship where someone always plays the blame game, perfect to be on this radar session.

Hailing from the suburbs of Dallas, Texas, Icon South is an artist, rapper, and music producer.

He started his music career as an EDM producer, after participating in Collectives in Los Angeles, having the opportunity to meet Young Money Entertainment artists. Icon started to produce hip-hop music since then becoming prominent in the music scene, achieving more than 4 million streams on Spotify and getting his music featured in EA games.

Working at the same studio where Lamb of God records their albums, Icon already released some really dope tracks, including this one which is my favorite so far, enclosing our Radar session #2, be sure to stay tuned for more.